I’ve seen far too many blog posts commemorating the new year, but there was no way I couldn’t partake when thinking about how much crazy growth The Cheerful Times underwent in 2015!

I’m over the moon and humbled by your dedicated readership and generous feedback, and that so many of you have shared my posts with your friends, family, and followers. It makes me warm and fuzzy inside!

Although I’ve been seriously slackin’ on the blog (I published a grand total of 8 posts in 2015… #womp), I was so amazed to see that The Cheerful Times had a huge influx of visitors over the past year. You guys are the best!

Here’s a round-up of some 2015 metrics & accomplishments!

I’m so thankful for everyone who made these accomplishments possible, and I hope that I won’t let you down in 2016!

Goodness gracious. Don’t you know how many things there are in this world that are more deserving of your hatred and social media ranting than people trying to better themselves? Imagine how much you can accomplish if you put that energy into something else. It’s a little ridiculous.

I’m not a resolution hater. The start of a new year can be a good check point to evaluate where you are and what you’re doing in life, and compare it to where you want to be and what you’d rather be doing. And then you can map out efforts to correct course (AKA resolutions).

But I’d much rather refer to resolutions as goals. Goals are friendlier, like helpful guides… rather than stressful, out-of-reach standards with fear and failure seeping through every crack like impenetrable smog. The term “goals” makes my anxiety senses tingle a little less. 😉

Like many others, I envisaged my ideal 2016 and developed some on- and off-blog goals.

Sharing them with others is the first step toward making ’em happen!

Last month my sister Rochelle adopted a new dog to live with her in her new Brooklyn studio apartment. His name is Henry and he’s a terrier mix!

I had already given Rochelle an apartment-warming gift, and I obviously had to give Henry a dog-warming gift. I knew I wanted to craft him something, but there was one problem: my sister is basically the most crafty person in the world. Anything I made him, she would be able to make for him ten times better and faster.

For this reason I knew I had to keep it simple and effective.

In my internet travels I stumbled across this adorable and incredibly easy craft: “Easiest Upcycled Dog Collar Ever!” from the Sew Doggy Style blog. It was the perfect gift! My sister loves throwing parties and Henry would be such a dapper doggie host in a little collared dress shirt accessory. Plus, Rochelle is the shop owner/seamstress behind Etsy’s Brooklyn Bowtied, so he would look like such a cute little fancy man wearing a collar/bow tie combo.

I decided I wanted to make three different collars for Henry, so I rallied my beloved crafty companion Athena and went to the thrift store. Rochelle told me that Henry’s neck size is 13 inches. Because Athena’s dog is also teeny, we took a trip to the little boys’ section. Some little boy dress shirts are labeled S/M/L instead of by neck measurements, so I brought my measuring tape to double check sizes just in case.

Here are the shirts we picked out!

You have to make sure of two things when picking out shirts for this project: END_OF_DOCUMENT_TOKEN_TO_BE_REPLACED 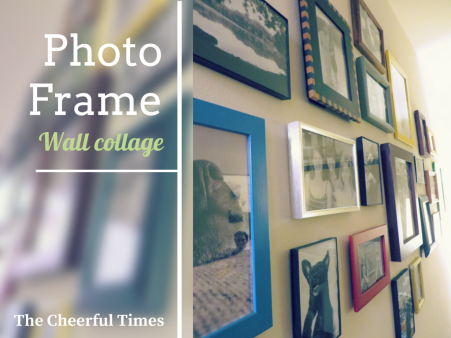 My name is Kelsey and I have a problem: I’m a photo frame collecting fiend. I can’t help it! There’s something about finding the perfect frame — no matter how simple in design — that gives me such a feeling of satisfaction. I scour thrift stores, antique shops, and garage sales in the name of my addiction, hoping to add to both the quantity and quality of my collection.

When people roll their eyes at me as I snatch up my latest find, I always give the excuse that one day I’ll move into my very own apartment with more white walls than I (and my frames) will know what to do with. I needed to stock up!

Even though we’ve been here 4 months, empty walls make it look like move-in day was yesterday. Luckily, I had three boxes of picture frames in the closet waiting for me to turn them into the giant photo frame collage that I always dreamed of making.

And here’s how I did it. END_OF_DOCUMENT_TOKEN_TO_BE_REPLACED

While I’m horrified that it’s been since September (being a senior in college is hard work!), I’m so pleased that I finally found the time to do a new refashion! You all really liked my big, blue, and buttoned dress refashion from Labor Day weekend, so I hope you’ll like my monstrous madras shirt refashion equally as much. If I do say so myself, it’s a good one!

I found this size “B8” beauty at Value Village for $4, which pains me because it was one of the cheapest articles of clothing I could find. My last refashion I got for mere cents in South Carolina while on vacation! Curse you, financially-inflated tri-state area. Anyway, as you can see, this little number needed some major work done.

My initial thought was that I would do another buttoned dress refashion. However, once I got home, I realized that the length was not what I thought it was. If I transformed it into a dress and wore it out and about, one wrong move and things would get a little… cheeky (wink, wink, nudge, nudge). Also, the loud madras pattern would most likely overwhelm the dress.

Suddenly, I thought of something even better and more fashion-forward: a CROP TOP! END_OF_DOCUMENT_TOKEN_TO_BE_REPLACED

Hello, everyone! I’m really excited to showcase my first major clothes refashioning here on The Cheerful Times blog. I’ve been working on it all Labor Day weekend, mostly because I have very limited sewing knowledge, supplies, and no sewing machine. At least hand-sewing everything gave me something to occupy my time with! Anyway, let’s get started–not just with the refashion, but with my extremely convoluted sewing journey.

The past few months I’ve really wanted to get in touch with my crafty side again.  I absolutely love thrift shopping, and following The Refashionista‘s blog inspired me to refine my sewing skills and turn things from crap to cute (sorry for stealing your line, Jenny Grumbles).

I picked up this little number from The Hospice Community Thrift Shop, a secondhand store that benefits hospice care, while I was on vacation this summer in Hilton Head, SC. I paid a whole 50 cents for it!

END_OF_DOCUMENT_TOKEN_TO_BE_REPLACED

Abby loves her new coat! 🐶❄️ Which makes her look extra round with her harness on top ⚫️
Who's ready for the most barf-worthy "Me at the beginning of the decade vs. Me at the end of the decade"??!
Title: Abby hides at the vet 👀🐶👖 Year: 2019 Medium: Photo Dog: Uncertain
The fruit (specifically cranberry) of our labor. A rose-ish colored cocktail for @rosecomm_inc! Order the "season's greetings" at Summit House, you won't regret it!🍹🥂 👀
Sometimes your work holiday party cocktail making class starts with shotgunning a beer and you just gotta go with it even though you never even went to a single college party because you were too busy doing homework 🤓🙃 Love my RoseComm ladies (and man, behind the camera!) and had a blast as always! ❤️🌹🥰
Sunsets in #Baltimore 🌆
Making friends 🦙😍
When you give a beast a bathie... 🐶🛁